The ALC educational model is emergent, meaning it is constantly “coming into being”. Just like people, especially young people. When you build a framework for something that is supposed to serve people, by nature, it needs to be emergent. We’re just starting to realize this in our organizational, management, and general business practices. ALC is moving this idea forward in the “K-12” education world.

One of the practices we use in an ALC is called Change-Up (∆-Up) meeting. When first started this practice we had the meeting combined with our other weekly meeting, Set-the-Week. At the ALC in NYC, where these practices were first used, we quickly realized the two meetings had very different purposes and it would be better to have one at the beginning of a weekly sprint and the other towards the end. We adapted.

Change-Up meeting uses a tool we call the “Community Mastery Board” or CMB. The CMB makes visible our awareness of things that are working and not working in our community. It also displays the process we use for creating, implementing, practicing, and mastering community agreements and cultural norms.

Later, we realized there were more distinctions needed within Practicing, as we often have to practice things for a while before mastering them. Thus, we added three levels within Practicing to help mark how well we were doing with each agreement. We made another adaptation based on the needs of the community, rather than just relying on the tool as is.

Originally, the meeting would involve the entire community (all students and facilitators). We would start with all of the items in Awareness and try to come up with solutions to implement, then work our way through the rest of the processes from there (moving effectively implemented items into Practicing, and checking in on how well we were doing with the items already in Practicing).

Recently, at ALC Mosaic (Charlotte, NC) @nancy suggested significant adaptation to the ∆-Up meeting process that I’m particularly excited about for a few different reasons. The shift mostly came out of a need to keep meetings short. As the school continued to grow in size, it made it challenging for everyone to participate without having the meetings drag on way too long. To address this, we started taking the items in Awareness and self-organizing in small groups around our interest/desire to address each of the items. For example: there may be three cards in the Awareness at the beginning of the meeting that say:

We read these three items aloud and mark a spot in the room where each discussion will take place. Everyone chooses the topic that is most interesting or important to them. We set a timer and give ourselves ten minutes to come up with solutions that we can implement for the next week to address each of these “awarenesses”.

Then we come back as one group and the facilitator gets a report-back from each small group. The goal is for each group to have a proposed solution to implement. We check each solution with the larger group to make sure there aren’t any major problems with it or significant logistical issues that were overlooked, but the default is to accept each small group’s proposed solution and agree to try it out as a community for the next week. From there, we can alter and iterate it based on our experiences.

Scaling Tools & Practices
Breaking into smaller group discussions during ∆-Up meeting was an awesome example of scaling our tools and practices. We did this once before when we created Spawn Points (small groups of students and a facilitator), which was a change from having the entire school start the day together declaring intentions. Both of these adaptations were meant to meet the needs of a growing community. I’m stoked about the possibility of having an effective ∆-Up meeting with 50 or 60 kids and it still keeping it under 30 minutes.

Scaling Trust
Even more exciting to me than the practical aspect of this adaptation is the fact that it also scales trust. Trust is the most fundamental aspect of the ALC social DNA. Trust is the water we swim in and the soil from which we grow. Our commitment to trust allows us to create an environment where students and facilitators can feel safe, autonomous, and aligned. 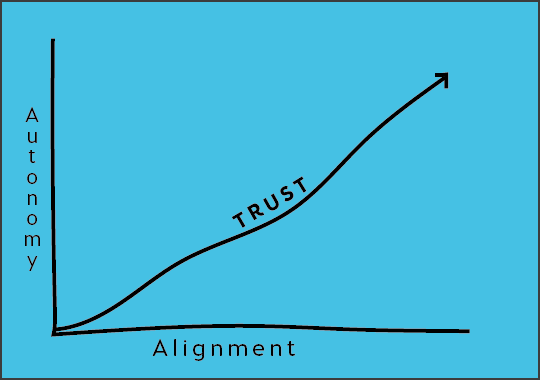 By self-organizing around the topical issues we face as a community, we are having to choose the conversation that is of most significance to us. Of course, this choice may be difficult. I may really want to share my thoughts and ideas about every topic being discussed. Within this constraint we have to prioritize and limit our focus, which is consistent with many of the other practices we have in an ALC (Kanban, daily intentions, etc.) and an extremely useful skill to develop early in one’s life.

By choosing to go to the discussion about stickers on fruit scraps in the compost bin, I’m actively trusting my community to effectively address the other topics that also affect me. Of course, in an emergent framework, no decision must be final. The key is that we collectively agree to practice the newly implemented solution so we can actually determine if it is effective or not. Usually there are aspects to our solutions that work and some that don’t. If we see it as a process of refinement that we are all participating in we can all become powerful collaborators and creators of culture.

Power: Democratic VS Agile
For kids to be (and become) self-empowered, they need to actually experience agency in their lives. If we want our children to be able to shape and change the world as adults, they need to be in collaborative communities that respect them as creative and powerful individuals.

A political democracy attempts to construct a system where the individuals and the group can be empowered, however there is a significant limitation within this framework. In a political system, power is viewed is a scarce commodity; if someone has more power then someone else must have less. Of course we all want to be powerful, so within this framework rules are created to limit and distribute the power. The emphasis is placed on adhering to governance and following a process as a way of protecting each other from power, as there is a fear of its accumulation. Essentially, within this type of framework there is a lack of trust.

There may be a “democratic” community that trusts individuals to lead their own lives and make decisions for themselves, but when it comes to the collective, trust is traded for fear. I’m not naively assuming that we can or should expect everyone to agree all of the time, or even most of the time. But, there’s a fundamental difference between being in agreement and being in alignment. Agreements are many and they come and go, whereas alignment speaks to the big-picture trajectory — the direction we are going and the space we are holding. I suppose a group of individuals could be in alignment about their distrust of the collective, but I don’t think that supports collaboration, collective intelligence, or anything truly revolutionary.

In an Agile environment we view power as way of experiencing oneself. Power is abundant. I can have more and you can have more — and, even better, together we can generate more than if we acted alone. The emphasis is placed on what is emerging from the present as a way of understanding who we are and what we need to be even more powerful, both as individuals and a collective.

This may sound obvious, but there is a significant difference in the way a community functions depending on how it views power and whether or not there is a cultural commitment to build trust into its relationships. If there is a commitment to choosing trust over fear and the emphasis is on emergence instead of governance, then we can create a powerful spiral where the individual’s gifts feed the collective, and the the collective continues to feed the individual.

Power grows in the soil of trust.