At ALC Mosaic, we’ve mostly used “Roots” and “Branches” to distinguish between our locations and the programs/ages that they serve. However, in that separation, there’s also some distinctions in how our ALC model is applied. These variations in application — what a Self-Directed Education looks like — are based on what is developmentally effective, needed, and dare I say *cringe* “appropriate”.

It’s been great to see the way @lacy created Roots from her own inspiration and intuition, partnered with Miguel and more recently Vidya and Amber, and how, especially over the last year, we’ve been able to see their work coming into a natural fit with the rest of the ALC model. In many ways, Lacy and @sarataleff (Cottonwood in Brooklyn) have been pioneers in adapting the ALC model to these younger ages without really knowing anything about it beforehand — which is pretty beautiful. Having them both step into greater levels of engagement with the ALC Network and ALF Community over the last year has been fun and exciting.

The original tools and practices we created in NYC (and the concepts around intention/reflection cycles) were geared toward the 7-13 age range — the current age demographics at Branches. Yes, it is true that other ALCs (NYC and Endor) have worked with some teenagers in this context before, but very few of them and one key difference is that these kids had not grown up (or spent several years or more) in an ALC before their teenage years. What we began seeing towards the end of last year is that some of the kids who are getting older and have been doing the daily intention-setting practice for a while were craving something more.

Inspired by some concepts I learned from Martin Peters and Guido van Dijk from Agora in Roermond, Netherlands, I decided to offer to pilot a new group for the oldest kids at Branches — working name Wings. My idea was to adapt the project-based kanban and scrum practices that are used at Agora to work in our environment, and of course, to iterate them over time with the kids.

The basic concept is to support the students in engaging in what we are calling Challenge Sprints — a period of time (usually a week) where the student determines a challenge they want to set for themselves (ex: understand World War II history, build a bicycle, become fluent in Spanish, plan a trip to the White Water Center, etc.). The challenge can be anything, big or small in scale. After they articulate the challenge, they produce a backlog of all the tasks or smaller projects that might possibly exist within that challenge. 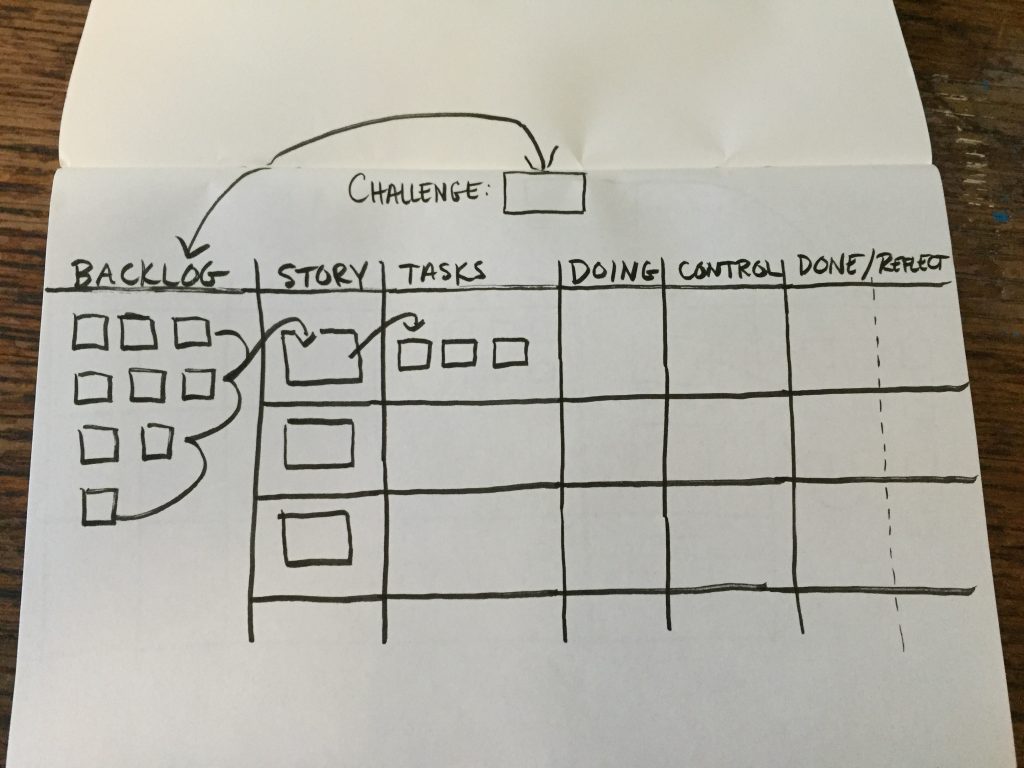 From there we discuss all the possibilities and articulate what the first step should be — what makes sense to do first? From that conversation, at least one Story is written, sometimes two or three. These initial Stories become the focus of the Sprint. Within each Story is likely to be the set of Tasks — the smallest, most actionable and specifically articulated steps.

After each Task is complete it can go into Control where it is reviewed by another person (sometimes me, as the Coach, sometimes another expert or experienced person, depending on the nature of the Task or its larger Challenge). If the Task needs more work it goes back to Doing for refining before it goes to Done, all of which is determined in dialogue between the student and coach.

When the Sprint ends, the student spends time reflecting on each Task that made it to Done and the larger status of their board. The Tasks that are finished can be assigned any kind of tags, categories, or information the student wants to document. How did this task make me feel? Was it fun? Was it challenging? What skills did it require? The possibilities for marking what was “learned” are limitless, and ultimately, it is up the student to determine what was valuable about it.

This information can be extremely useful, as it not only provides a large inventory of documented learning for a portfolio or transcript, but more importantly it helps inform the next Sprint. Considering what was learned in this sprint, what new items should be added to the Backlog? What’s the next-most-important Story to resolve? Does the Challenge need to be reframed? Does the Challenge need to be tossed completely? Why?

I’ll know more about what this actually looks like when we do it! 🙂

For now, let me back up and show you what we’ve done so far.

Since I made the offering, the four oldest students at Mosaic opted-in to be a part of the “Wings” group and start playing with these tools and practices. Today we met to do a pre-challenge-sprint exercise I came up with to get them thinking about what they might want their first challenge to be.

The exercise was essentially a series of brainstorming prompts about oneself. 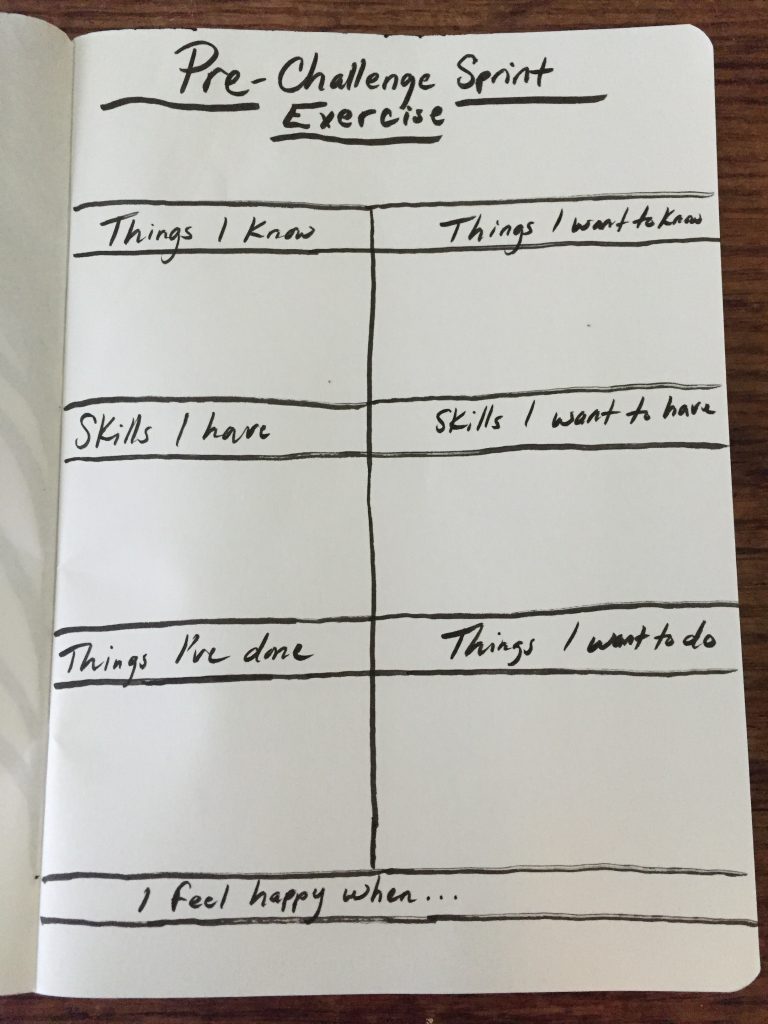 They each had their own space to work on the exercise. 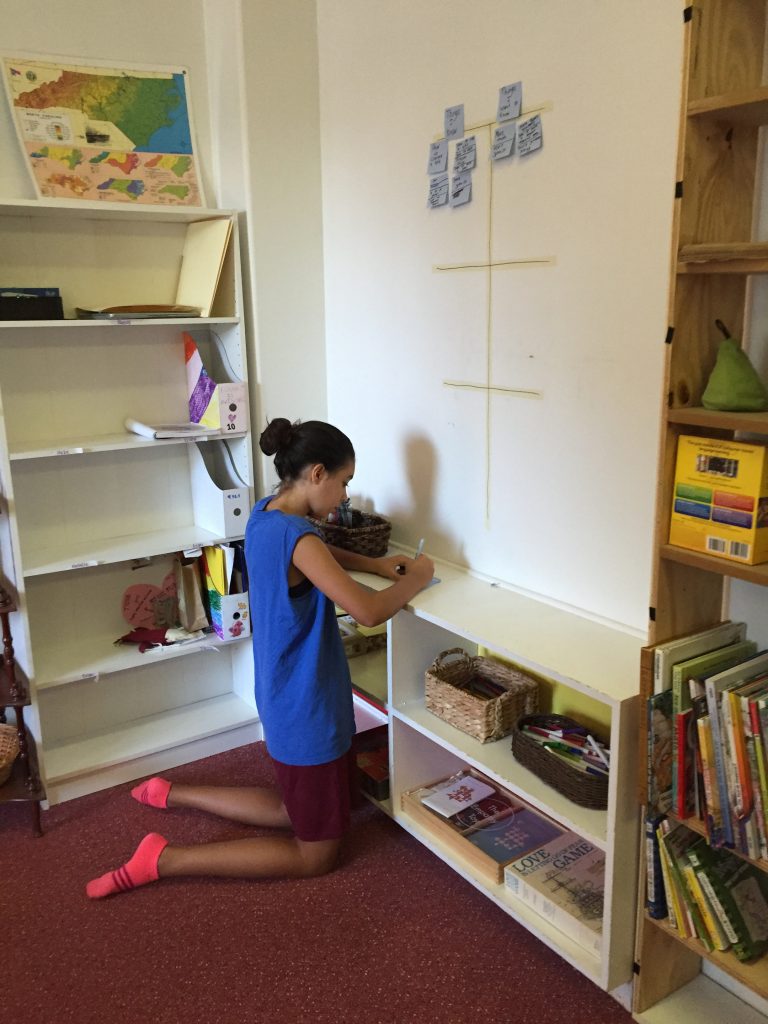 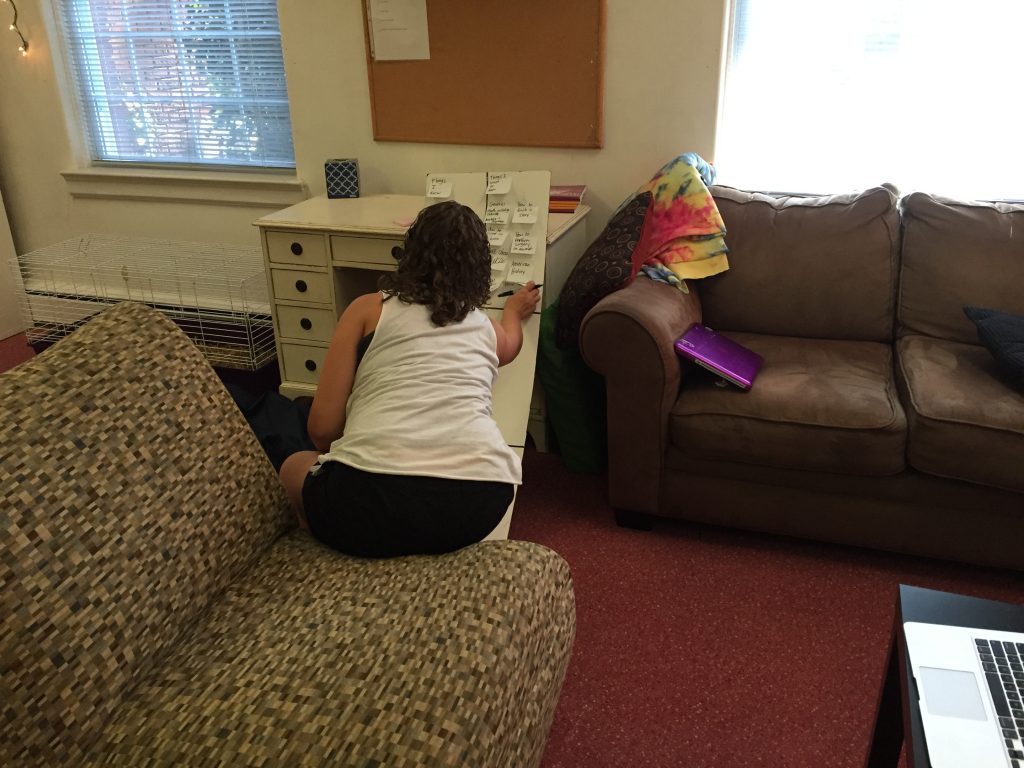 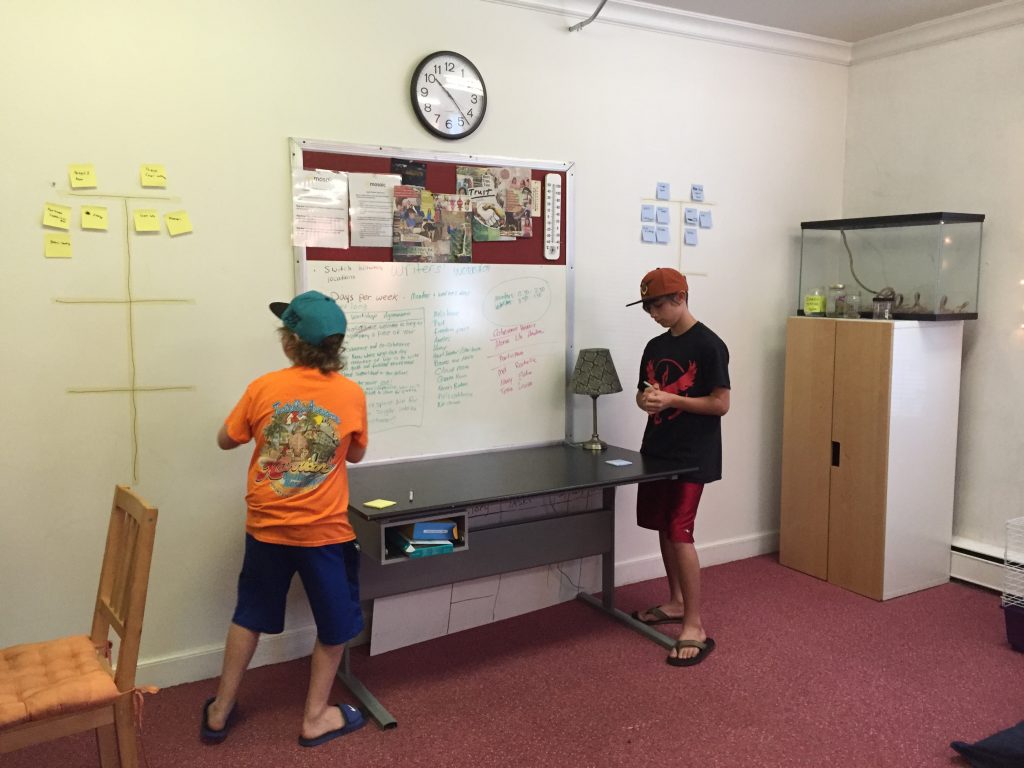 After we finished the exercise, they looked through all the columns on the right side, the “I want” side, and chose one or two items from each section that really stood out to them. We then went around and talked about those items and dug into the “Why” for each one — why is it that I am really interested in learning this particular programming language, or gaining car mechanic skills, or becoming fluent in Spanish, or traveling more?

Today their reflection time (built into Friday afternoons at ALC Mosaic) was spent capturing this information in their blogs and expanding on the “whys”.

Monday we start with the first Challenge Sprint!